This fundraising campaign is to support The Institut Brenda Strafford's efforts to:

On August 14, 2021, a massive 7.2 magnitude earthquake struck southern Haiti, causing devastation in this underserved area of the Caribbean. The earthquake damaged or destroyed 120,000 homes, injured 12,000 people, and caused 2,200 deaths, leaving 650,000 people in need of humanitarian assistance. Unfortunately, the Institut Brenda Strafford, part of The Brenda Strafford Foundation, a registered Canadian charity, is in southern Haiti and was significantly affected by the earthquake.

Serving the people of Haiti in partnership with the Ministry of Health since 1982, Institut Brenda Strafford is Haiti’s largest charitable medical facility specializing in eye, ear, nose, and throat care, providing 5,000+ consultations in a regular month. However, many buildings at The Institut and homes of our 108 staff were damaged by the earthquake. While some services were disrupted by the earthquake, our dedicated staff went into action, providing emergency medical care under tarps and tents in the moments immediately after the earthquake. Numerous people in the community were forced to take shelter in makeshift tents or unsafe houses, with some of our staff taking refuge on the Institut’s grounds.

Two months after this tragic event, The Brenda Strafford Foundation and The Institut remain committed to helping people in Haiti. The Foundation is also supporting The Institut’s staff as they continue to provide medical care for others, while trying to recover from significant losses in their own lives.

Current priorities in our earthquake response

Highlighted achievements since the earthquake

Figure 1. Partnerships with humanitarian agencies including UNICEF, FONTEN, and Samaritan's Purse have enabled us to acquire tents for the provision of medical and surgical services. Here one tent is being use for visual acuity testing.

Figure 4. In 2020, Institut Brenda Strafford opened the new Pre-Consultation Area, made possible by generous donations. This new space was one of the few buildings at the Institut not severley affected by the earthquake. It was able to be quickly re-purposed, enabling us to provide emergency shelter, medical care and surgeries in a safe and dignified space during our disaster response.

The Brenda Strafford Foundation is asking for your generous support.

While the road to recovery will be long and challenging, we are extremely grateful for the ongoing generosity of our donors and supporters to ‘Help Us Help Haiti,’ as we continue to strive to provide high-quality, compassionate, and dignified medical services to those in need.

100% of donations received by The Brenda Strafford Foundation for the ‘Haiti Earthquake 2021: Institut Brenda Strafford Emergency Fund’ will support the Institut’s response efforts in our areas of greatest need.

We are committed to our people and will match all donations made towards “Staff Relief” to assist our team members in rebuilding their homes – doubling the impact of your donation! 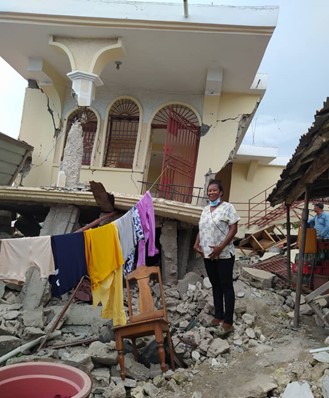 Figure 5. A staff member of Institut Brenda Strafford stands outside their home that was destroyed during the earthquake.

Other Articles in Foundation News

Release of the Butterfly Ceremony 2020