Research at the University of Calgary

The Brenda Strafford Foundation supports research at the University of Calgary that contributes to our vision of providing innovative services through leadership, research and best practices, to advance the quality of life of the communities we serve.

We invest in the following research programs based at the University of Calgary:

The Brenda Strafford Centre on Aging 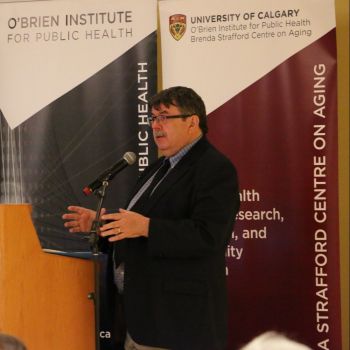 Established in 2011, The Brenda Strafford Centre on Aging at the University of Calgary was created to enhance health and wellness of seniors and better inform public policy with regard to seniors’ issues through coordinated research, teaching and learning, and community outreach efforts... Go to Announcement >>

In 2016, the Centre on Aging moved under the umbrella of the O'Brien Institute for Public Health. As the Centre on Aging grows, the OIPH will serve to build the Centre’s capacity to function as an administrative and collaborative hub for the university’s aging research and interdisciplinary educational programming undertaken by the faculties of Kinesiology, Medicine, Nursing, Social Work and others. The Centre has a mandate for: age-related research; interdisciplinary education; public policy and community outreach.

Her major research interests involve the use of quality improvement and knowledge translation (KT) science to improve the care provided to older adults. She is the Principal Investigator/co-Principal Investigator on a number of active grants, has authored over 75 peer-reviewed journal publications, and co-edited of an evidence-based book that provides a practical clinical guide to Geriatric Medicine.

She is the Medical Director for Specialized Geriatric Services within the AHS Calgary zone. She is also KT Committee Chair of the Canadian Frailty Network, a Networks of Centres of Excellence network funded to improve the care of the frail elderly.

The Brenda Strafford Foundation Chair in Alzheimer Research was established in 1997 at the University of Calgary to: 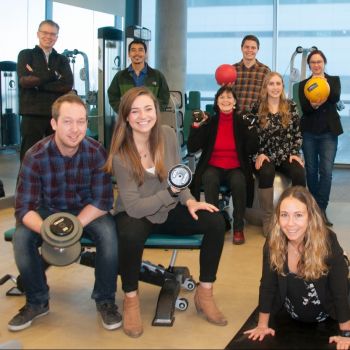 Poulin is leading an interdisciplinary team of experts in a research study called Brain in Motion. Brain in Motion I, completed in April 2016, enrolled 250 inactive older adults in an 18-month aerobic exercise program, and measured factors like cardio-respiratory fitness, genetic risk factors, sleep, and cognitive function. This first phase of the study demonstrated a significant relationship between fitness, vascular regulation and cognition in older adults free of overt disease. But figuring out the why, and the how, will be key in develop strategies to prevent and treat Alzheimer ’s disease and related dementias.

The follow up study, Brain in Motion II, will examine the relationship between exercise, cerebral blood flow, and cognition in older adults who are at increased risk of Alzheimer ’s disease and related dementias.

“We know there are various cognitive components that are impacted by exercise. We wanted to get a better sense of the underlying mechanisms behind this and the practical applications of this knowledge.”
- Marc Poulin,PhD

The Brenda Strafford Chair in the Prevention of Domestic Violence

In 2007, the Foundation established the Brenda Strafford Chair in the Prevention of Domestic Violence at the Faculty of Social Work to provide leadership in research related to the prevention of all facets of domestic violence. Read UToday Announcement >>

Wells was appointed to The Brenda Strafford Chair in 2010 at which time she created SHIFT: The Project to End Domestic Violence. The purpose of SHIFT is to enhance the capacity of policy makers, system leaders, clinicians, service providers and the community at large, to significantly reduce the rates of domestic violence in Alberta.

In December, 2013 this work and collaboration with The Government of Alberta resulted in the announcement of the government’s redesign of their family violence prevention framework called: Family Violence Hurts Everyone: A Framework to End Family Violence in Alberta.​ “The Government of Alberta’s new Family Violence Prevention Framework is directing new investments, policy and legislative changes for family violence prevention and intervention over the next five to 10 years,” says Wells. “The intention is that over time, rates of domestic, sexual and family violence in Alberta will be reduced significantly.” Read a UToday Q&A with Lana Wells >>

In 2016, Wells was invited by the Permanent Mission of Canada for a second time, and travelled to Berne and Geneva to lead workshops and participate in a number of international panels, including Preventing Violence Against Women: Engaging Men and Boys, Building Alliances a joint event of the Embassy of Canada and the Swiss Agency for Development and Co-operation. The panel was part of the international 16 Days of Activism against Gender Violence. While in Geneva, Wells had discussions with UN Women to sponsor the design of a toolkit that could support governments around the world to develop comprehensive strategies to engage men and boys in violence prevention. Read more in UToday >>

"I am committed to making research accessible and working collaboratively with a diverse range of stakeholders, including the Government of Alberta, to inform and influence current and future family violence prevention efforts."
- Lana Wells